The grain elevator pictured here is owned by the Louis-Dreyfus Commodities Co. (Yes, the same Louis-Dreyfus family of Julia Louis-Dreyfus fame!) The elevator abuts an area that the city had hoped would be developed into an entertainment district revolving around Rose Garden and a revamped Memorial Coliseum. City and civic leaders have privately suggested the facility was an impediment to the Rose Quarter’s success. In reality, the Rose Quarter is dead due to its own horrible design. Talk of moving the facility has persisted for at least 24 years. And heated up again in the mid 1990s when the Rose Garden was built. Blazers owner Paul Allen reportedly offered $5M for the waterfront property in 2001, though apparently LDC sought $21M to vacate the site. $12M was invested in expansion and modernization in 2012.

The elevator went by the name “Globe dock” for many years until being sold to Cargill but returned to former name in 1957 when LDC picked it up. Named after its original owner, Globe Mills, the facility was built in 1912 and was nearly destroyed by spontaneous explosion of wheat dust under the dock in 1960. Now informally referred to as O Dock, which may derive from the old tradition of naming docks after the street they were on, here being Oregon St.

Its persistence is an enduring reminder of the city we once were and no longer are.

Memorial Coliseum Area, 1977. Hard to imagine anyone thinking a suburban style motel was a good idea here. Must have been pretty noisy amongst the trains, ships and grain elevatoring. Definitely pre-Trip Advisor, Hotels.com.

East end of Steel Bridge showing ramps, including that handy on-ramp to 84-EB. That little white building, whatever it is, has hung on though all the changes. Oct., 1977 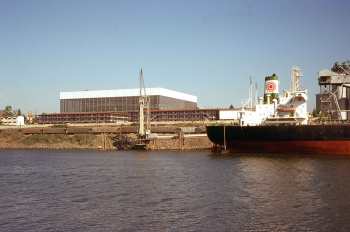 Down on the Willamette. October, 1977

Grain elevator and Thunderbird Motel. Bet it was fun sticking guests in these rooms! 1977

An explosion and fire nearly destroyed the facility in 1960. 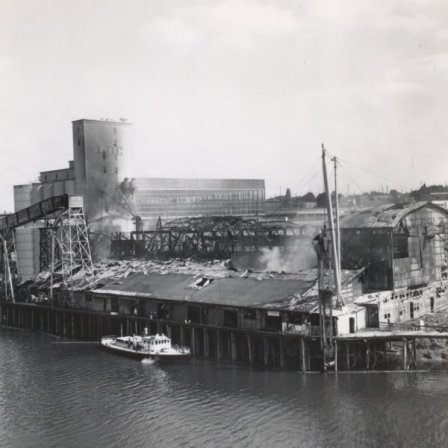 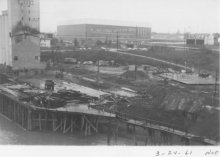 Site cleared for reconstruction. Rebuilt by 1962 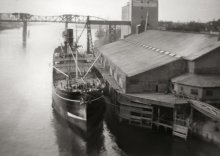 Ship docked at O Dock prior to explosion and fire. Date unknown. 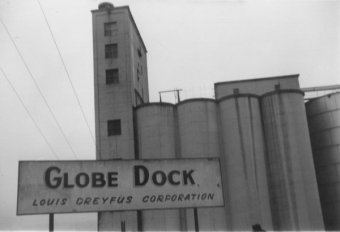